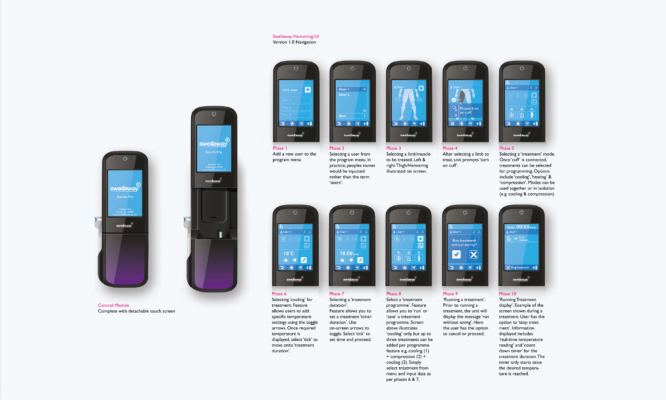 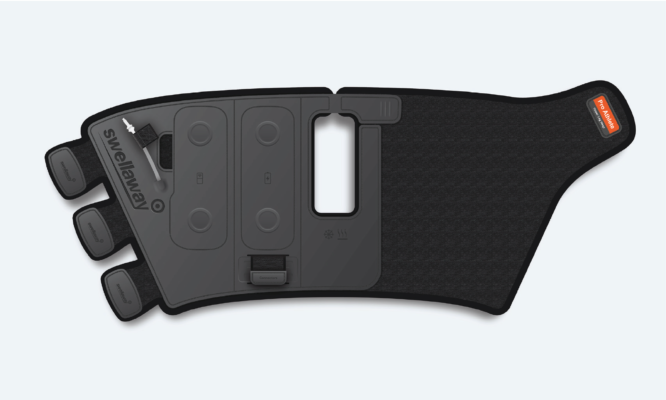 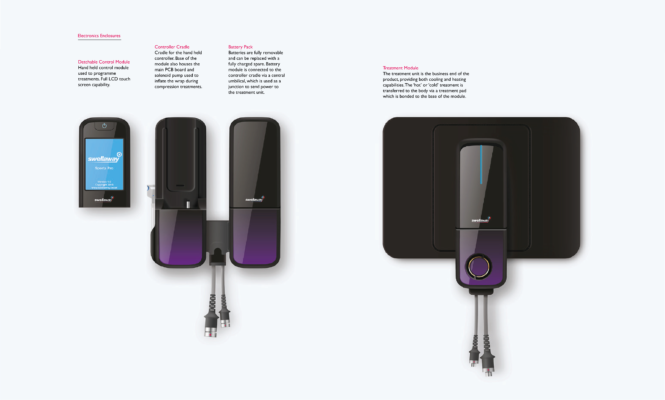 Swellaway Ltd is a medical device company with a unique treatment technology. Their devices treat wounded muscles through controlled compression, combined with cooling and heating peltiers. Unlike many of their competitors, Swellaway’s products are fully portable and do not require the need for ice, water and/or heavy equipment. It’s because of this that they’re able to provide effective treatment in a controlled manner and in a way that’s more efficient when compared to traditional cryotherapy tools.

The Challenge
Swellaway originally approached Blueprint with the aim of developing their bench-top prototype into a commercially viable solution tailored to the professional sports industry.

As part of a full R&D project, Blueprint were able to develop and supply a number of prototype solutions, suitable for trial with a number of professional organisations.
Partnering with the likes of UCLAN, our team of designers, electronic engineers and software developers worked with great effort to create a solution that was capable of delivering Swellaway’s USP, while also creating a device that was capable of delivering a solution that can be produced on a mass produced scale.

From a UI perspective, this enabled Swellaway to introduce new features such as user programming, data capture and downloads, benefiting both athletes and physiotherapists during rehabilitation.

With regards to hardware, after re-designing and reconfiguring the electronics, we were able to create a more versatile device, setting the scene for a multi use product. The electronics were split into two sections comprising of the control module (with a fully detachable, hand-held programmer), battery pack and a separate plug-in treatment module. This principle not only slimmed the device down, but also allowed Swellaway to expand their treatment range, targeting various parts of the body. This was made possible by the development of bespoke treatment wraps offered as ‘consumables’.

Blueprint’s work didn’t just end there. As part of the R&D process, we also undertook an extensive research programme, investigating new materials and processes in order to create a fully flexible treatment pad, capable of spreading the cooling and heating effect driven by the peltiers. Prior to Blueprint’s involvement, previous prototypes had used metal elements for their levels of conductivity, but this was never seen as a viable working solution and was purely to prove the concept. After extensive research and trialling, Blueprint were able to create a flexible, conductive solution that not only delivered a comprehensive treatment, but was unique in generating I.P. for Swellaway.